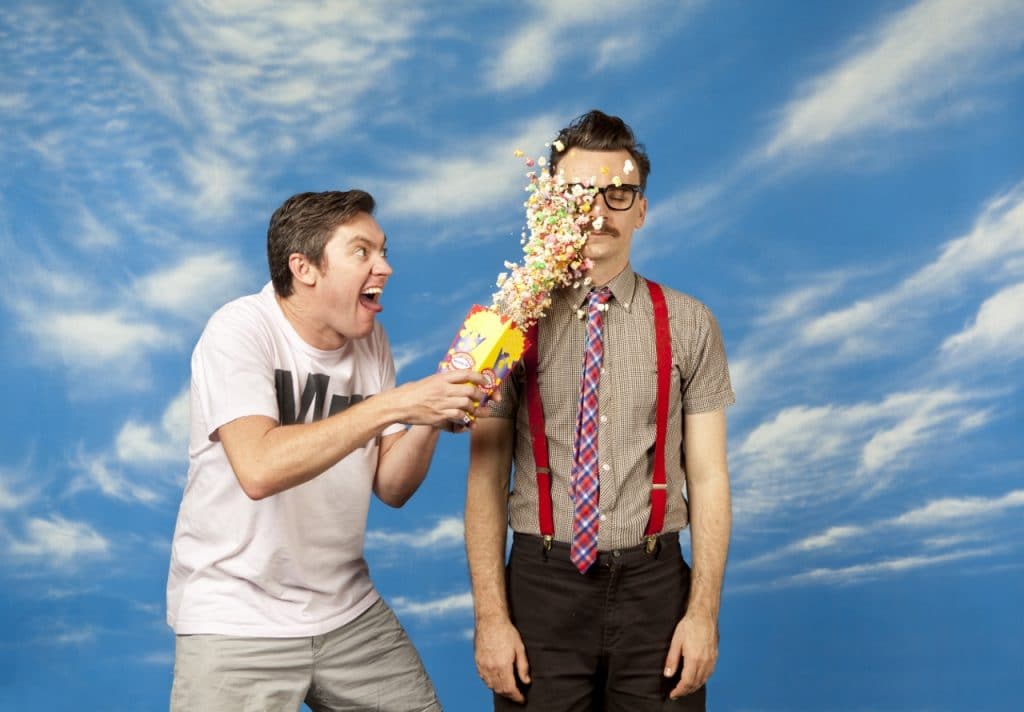 An award winning kids comedy show all about the movies

Australia’s most sort after kids’ comedians, The Listies star in The Listies 6D (It’s twice as Good as 3D), a comedy show all about the movies. Expect haunted backpacks, stunt driving ninja nans, bloodthirsty aliens, vomiting puppets and fully automatic toilet paper cannons in this this hour of fun for the whole family. Best of all, in every performance an actual 6D movie is made – starring the audience!
The Listies 6D is jam packed full of all the high-brow things that kids love, like fart jokes and vomiting and aims to make everyone in the audience, including dads, LOL (laugh out loud), ROLF (roll on the floor laughing) and even ROLFSHALBOWCO (roll on the floor laughing so hard a little bit of wee comes out). They may even film it and put it on Youtube!
The Listies create an interactive atmosphere to tell stories set in the world of kids and forgo the usual tropes of fairy tales and book adaptions, in favour of parodying pop culture, celebrity, parents, computer games and txt speak and this is their take on the movies. Let’s just say, the silver screen is about to turn brown.
This show is six dimensions of fun:
1. Raucous, 2. Cheeky, 3. Interactive, 4. Irreverent, 5. Hilarious, 6. Kids entertainment like you’ve never seen.
Warning, This show is Rated S for stupid.

This is a show written and structured to perfection…if there was a Wikipedia entry about how to write and perform a kid’s comedy show, this would be the one to define it. Fringe Review (UK)

“The Listies teach children that the theatre can be a wonderful and exciting place. If your kids have never been to the theatre before, do them a favour and make this their first experience. It’s something they will never forget.” The Scotsman

Kids and parents come dressed in your pajamas and you might win a prize!