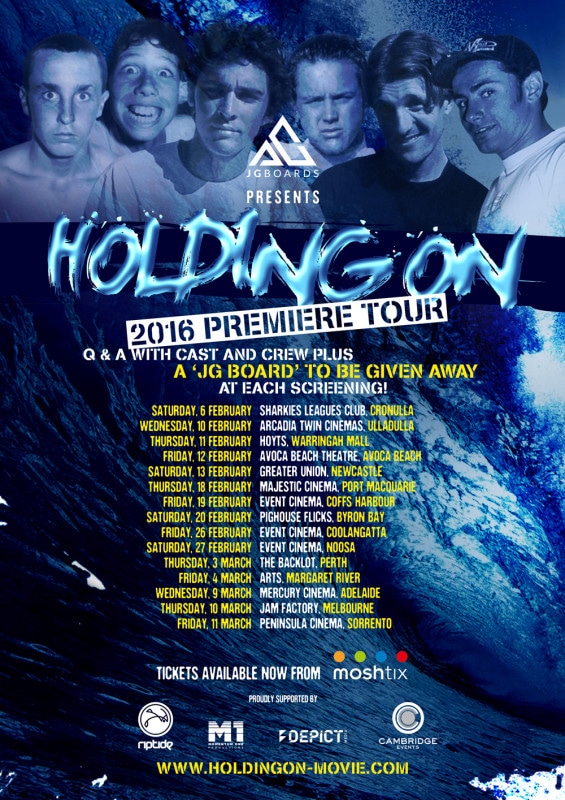 Holding On is the incredible true story of a group of friends from Cronulla, who through their reckless, no-holds-barred approach to living life and riding waves changed the sport of bodyboarding forever.

In the late 80’s early 90’s, three friends Dave Ballard, Matt Percy and Nathan ‘Nugget’ Purcell started riding the notoriously dangerous waves of Cronulla on a new invention called the bodyboard. With their rebellious attitudes, tough family lives and lack of financial support, they were labelled by the media as the Skid Kids, a label that would also eventually be applied to Adam ‘Wingnut’ Smith, Mark Fordham and Christian ‘Rissole’ Rigucinni.Through their reckless no-holds-barred approach to bodyboarding Shark Island, a wave previously deemed unrideable, not only were the Skid Kids gaining the respect they deserved from traditional surfers, but they were inadvertently spearheading the monumental rise in bodyboarding’s global appeal and popularity. Pro model boards, lucrative sponsorships and exotic overseas photo shoots were lavished on the Skid Kids and they were living the dream lifestyle of getting paid to do what they loved.

With no real guidance or path to follow, the Skid Kids lawless spirit and love for their chosen sport would see them on a rollercoaster ride of parties, big waves, competition successes and boycotts. Their wave-riding, revolutionary board design and creation of the iconic Shark Island Challenge competition generated a cult following and left an immeasurable impact on the sport of bodyboarding around the world.

A story of rebellion, Innovation & friendship, Holding On is the first ever feature length documentary made on Bodyboarding. With over 30 interviews and never-before-seen seen archival footage.  A killer soundtrack supervised by Parkway Drive’s Winston McCall, Holding On is the raw story of a thrilling 90’s subculture that was as exciting as it was dangerous.

Bar Open from 6.00pm, Film Commences at 7pm, Q&A with Cast and Crew after Film.