“One of the most precious children’s shows I’ve ever seen.” Kate Ceberano, June 2014

Still Awake Still! is a funny, anarchic, musical theatre work with irresistible child-appeal and a sophistication that delights adults and children alike. It’s gloriously unpredictable and voluptuous, with the glamour of a big night out.

Part-concert, part-theatre, the entire show emerges like magic from beneath the lid of a grand piano. Featuring superb acoustic music, comic acting and a rich visual world of surprises, Still Awake Still! is a unique experience.

The show features the legendary Miss Ivory Tinklefinger, Queen of Sleep, whose absurd task is to sing the audience to sleep. On a magnificent grand piano, she proudly performs her lullabies. But not only does she fail to put a single child to sleep, she also conjures two mischievous musical boys from the heart of the piano. What’s happening? Who is in control here? And can she resist the temptation to join in?

Inspired by parents’ daily challenge of putting their little ones to bed, Still Awake Still! explores the tussle between order and chaos, rest and play, reason and intuition, in a drama that celebrates the process of creativity.

Still Awake Still! played to sell-out houses of delighted families during its premiere season at the Arts Centre Melbourne, Australia, in September 2011 and played at the New Victory Theater in New York this year.

Still Awake Still: Mischievous cabaret for kids “…. as soon as Miss Ivory Tinklefinger, Queen of Sleep, entered the stage, the fears subsided. She is an artist in absolute control over every facial muscle and she knows how to use them to elicit pearling laughter from the children in the audience who she is there to sing to sleep. Along with her two sidekicks, Miss Tinklefinger sings, performs magic tricks and clowns around for the best part of an hour, without the slightest lull. Her voice is strong and interesting, and the opening-session audience was mesmerised, especially by the way she made things move by waving her hands. Based on much-loved songs from the bedtime book I’m Still Awake Still! by Elizabeth Honey and Sue Johnson, this reimagining for the stage is wonderfully inventive and very entertaining. When Miss Tinklefinger shines her torch at the audience to check who hasn’t gone to sleep, the kids are in stitches. Yet the performance also manages to have a slightly dangerous undertone through the bear that’s hiding in the grand piano but only ever shows its feet. When I asked my little boy afterwards, he was utterly convinced that the bear was real and still living in the piano. This is a piano that also spits out table-tennis balls and houses a double bass, so the assumption isn’t quite as strange as it might sound. Still Awake Still! is a brilliant example of how to engage a young audience and make them want to come back for more. My son had only one negative thing to say. As the light came on he looked at me, slightly bewildered, and said: “Is it finished already?” It was so fabulous, we could have done with a little bit more of Miss Tinklefinger’s antics, but in the scheme of things, this is a minor complaint. In Daily: Adelaide Independant News 16 Jun, 2014

ADDED BONUS – THE ENORMOUS IDEA WORKSHOP
A free 45 minute workshop following the performance is open to all attendees of the show. 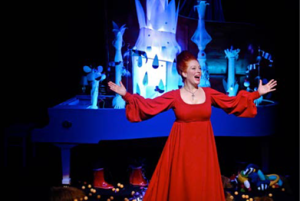 Children are encouraged to wear their pyjamas and bring along a pillow to the show.