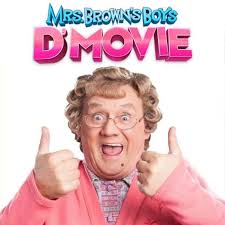 Like all the traders in Dublin’s historic Moore Street market, Agnes Brown inherited her fruit and vegetable stall from her mother, as her mother did from hers, and so on across the generations. So when Agnes receives an outrageous tax demand from the Revenue Office it’s not just her livelihood that’s threatened but her heritage, and her dreams for her daughter Cathy’s future.

While Maria and Rory embark on a hapless attempt to raise funds by swimming the channel, Agnes discovers there’s more to the tax demand than she first realised. The whole market is under threat from a ruthless developer. Agnes Brown is all that stands between Moore Street and the bulldozers.

As the deadline for payment looms, Mrs. Brown must take on the full forces of the Irish establishment to save the market and protect her heritage. Her only help, her family and friends: Winnie McGoogan, her eccentric neighbour; Buster Brady, Dermot’s dodgy best mate and his motley troop of blind trainee Ninjas; and Maydo-Archer, a barrister with an unhelpful affliction. As daughter Cathy turns her back on the family business, and unwanted secrets emerge from Agnes’ past, could the Brown matriarch finally be out of her depth? It’s sink or swim for Agnes in Mrs. Brown’s Boys D’Movie. Perhaps it’s just as well that Grandad and his elderly pals, relics of the Irish Resistance, are there to lend a shaky hand.

BOOK ONLINE or from the box office half and hour before the screening.