Hector is a British road movie about family, friendship and human compassion. Set across the UK, Hector is the alternative Christmas feel good film of the season, when people’s thoughts naturally turn to family. Audiences responded with both laughter and tears when the film received its world premiere in competition at the 2015 Edinburgh International Film Festival.

Hector McAdam (Peter Mullan) is embarking on his annual journey from Scotland to a London shelter, where Christmas cheer and a turkey dinner await him. But, aware this might be his last, Hector opts to reconnect with his past and reunite with those he left behind. Life without a home isn’t easy but Hector is resilient, accepting of people, and life, as they come. He meets with friendship and kindness, disappointment and cruelty, discomfort and joy. His cross country odyssey brings chance encounters, companions old and new who need his support as much as he needs theirs.

The screening includes a special performance by award-winning songwriter and performer Emily Barker whose songs feature on the Hector soundtrack. 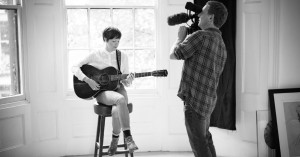 Emily Barker is the award-winning songwriter and performer of the theme to BBC TV’s Wallander starring Kenneth Branagh. Her music is a blend of roots influences from country to English folk via 60s pop.
Alongside the Wallander theme, Emily has also provided the theme music to BBC TV drama The Shadow Line (which went on to win an Ivor Novello for best TV soundtrack for series composer Martin Phipps) and has recently composed music for Daniel Barber’s The Keeping Room (Sam Worthington, Britt Marling, Hailee Steinfeld) as well as her first feature length soundtrack, for Jake Gavin’s UK road movie Hector starring Peter Mullan. released to critical acclaim in the UK in December 2015.

Emily’s most recent album is The Toerag Sessions, featuring solo versions of songs from her six previous albums, recorded live to tape at London’s Toerag Studios with Grammy-wining producer Liam Watson; it was nominated for Album of the Year at the UK’s inaugural Americana Awards.

Emily Barker performance at 7pm, followed by the Hector screening.