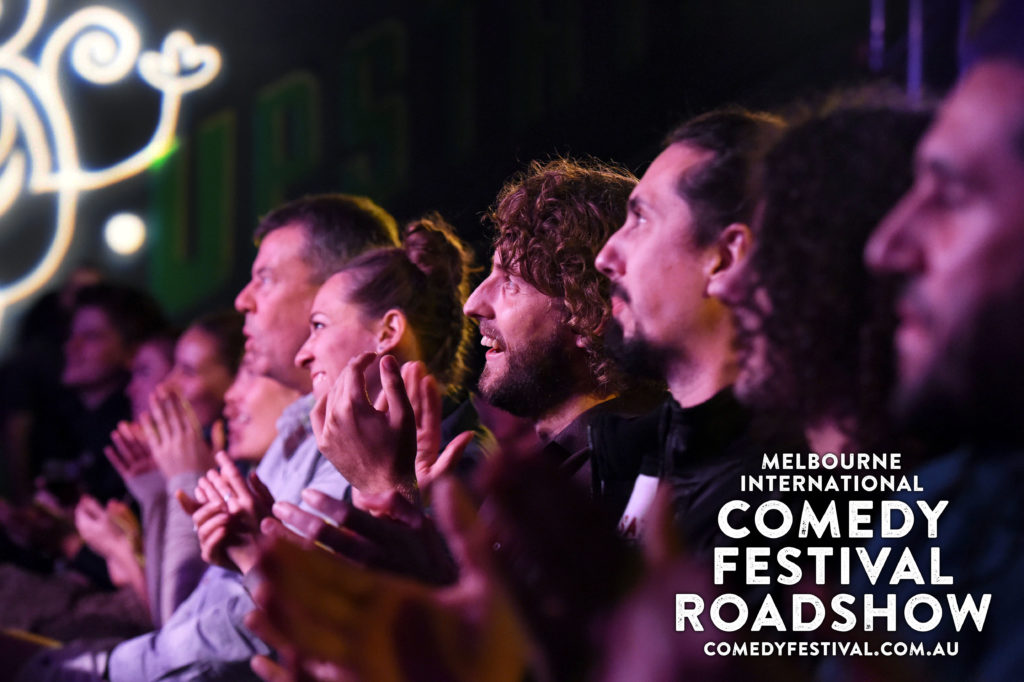 Looking for a laugh? The Melbourne International Comedy Festival Roadshow is coming to town for 2 shows!

Forget I-Spy, spotto and stale servo snacks, this road trip is jam-packed with a crew of fantastically funny comedians, specially selected to bring the fun of the Festival to towns and cities around the nation.

For 20 years the Melbourne International Comedy Festival has been touring far and wide, bringing giggles, guffaws and good times to Australia and further afield. Whether you’re in Katherine,
Quirindi, Kyneton or Cairns, you can still experience Australia’s largest and best-loved comedy festival in your own backyard. We’ve got over 80 destinations on the laugh-laden schedule, and a
line-up of artists to tickle anyone’s funny bone. The Roadshow really has something for everyone!
Grab a mate, grab a date… grab a ticket to the Roadshow!

Performances often contain coarse language, sexual references and material that can offend. It is recommended for people aged 15 years or older and youth must be accompanied by an adult.

Tom Cashman (MC) is a rising star of Australian comedy. He had a huge 2018, writing and featuring on the ABC’s Tonightly with Tom Ballard and taking his debut live show Good around Australia to sell out crowds and rave reviews. He was selected as part of Melbourne International Comedy Festival’s Comedy Zone showcase in 2017, toured with Roadshow in 2018, and is a regular at comedy clubs around the country.

Paul Williams meandered onto the comedy scene in 2016. Since then he has performed multiple comedy shows all around the world (4 countries). He has been nominated for two comedy awards but he sadly lost both of them. His influences include movies and music. He hopes you enjoy his comedy and is very sorry if you don’t.
Awards:
2018 – Best Newcomer Nominee – Melbourne International Comedy Festival
2017 – Billy T Award Nominee – New Zealand International Comedy Festival
2016 – Vice i-D – Auckland’s Ones to Watch

Xavier Michelides has a unique brand of surreal character comedy. A festival veteran, he was nominated for the Golden Gibbo in 2011 at the Melbourne International Comedy Festival and Best Comedy at Perth Fringe World in both 2012 and 2017. More recently Xavier has collaborated with Ben Russell and Maggie Looke with the stage performance Nö Shöw and Restaurant F*ckheads, plus the podcast The Tokyo Hotel; all receiving critical acclaim. Xavier has written for television; he is currently a writer on The Project and has previously worked on Good News Week, You’re Skitting Me and Dafuq? He has also appeared on TV programs such as ROVE live, SBS’s Stand Up @ Bella Union and ABC’s Comedy Up Late.

Mawaan Rizwan – man in a sparkly tracksuit, son of a Bollywood star – is a Pakistan-born, London-based performer full of infectious energy. A successful writer, actor and comedian, Mawaan has starred in a BAFTA-winning television series and written for the New York Times, as well as amazing over 18 million views at his YouTube channel. Audiences can’t help but be captivated by his unique hybrid of confessional stand-up and skillful physicality.

Doors and bar opens half an hour prior to the show commencing.