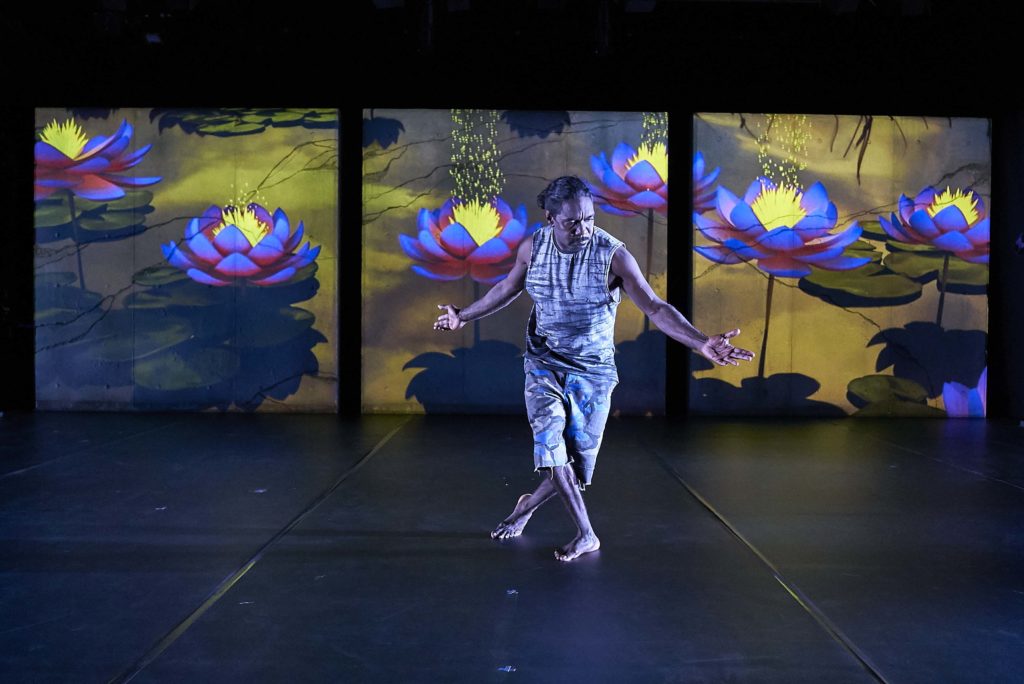 Burrbgaja Yalirra (Dancing Forwards) is a triple bill of solo works curated by Marrugeku’s artistic directors Dalisa Pigram and Rachael Swain as part of a program to support leading change makers in intercultural contemporary dance. Each production explores different facets of the complexities of reciprocity which challenge our understanding of our history and our relationship to the land in Australia. Burrbgaja Yalirra is a deeply poetic and vivid engagement of Indigenous and non-Indigenous cultures across dance, music and storytelling.

The three pieces were an intriguing amalgamation of exotic music, cultural storytelling and superb dance. — The Australian

Ngarlimbah (You are as much a part of me as I am of you) is a spoken word and animated video work conceived by Walmajarri/Nyikina painter and poet, Edwin Lee Mulligan, in collaboration with award-winning media artist Sohan Ariel Hayes (Cannibal Story, Boorna Waanginy). Ngarlimbah is the essence of reciprocity between human, spirit and environmental realms. Ngarlimbah tells the stories of two dingoes, the calm Yungngora and the dark dog Jirrilbil whose final resting place is a billabong near Noonkanbah, Central Kimberley where waterlilies grow. Yungngora and Jirrilbil visit Edwin in his dreams to speak back to contemporary concerns in his community.

Miranda Wheen performs a solo dance work choreographed with and directed by Serge Aimé Coulibaly (Burkina Faso/Belgium). Miri takes as a starting point the final, initially unpublished, chapter of Picnic at Hanging Rock and the fate of her fictional namesake ‘Miranda’ who seemingly disappeared in the Australian landscape. Miri explores the stumbling, often awkward and painful position of settler Australians grappling with understanding Indigenous Australian experience and perceptions of land, while negotiating their own troubled belonging to it. It’s in this space of instability and fragility that Miranda attempts to find her dance, proposing a similar experience of a white Australia struggling for a moral, intellectual and spiritual position with which to deal with it’s history.

Dancer and violinist Eric Avery collaborates with Koen Augustijnen (Belgium – co-choreographer of the award winning Gudirr Gudirr) to create Dancing with Strangers. Eric belongs to the Yuin, Ngiyampaa Wangaaypuwaan and Gumbangirri peoples and is a custodian of songs and dances from his father’s line. Dancing with Strangers explores the first colonial contact period, including early and missed opportunities for exchange in language, dance and sharing knowledge. Eric takes inspiration from the story of his great-great-grandfather, Jack Biamanga (Yuin) who saw the First Fleet sail past his mother’s country (Monaroo region of NSW). He imagines where we might be now if there had been music and dance made between the two cultures and explores the dislocation of his people resulting from the lack of such negotiated contact.

The world premiere of Burrbgaja Yalirra was at Broome Civic Centre in Broome, Australia 30 May – 2 June 2018.  Followed by a season at Perth Institute of Contemporary Art (PICA), Perth, Australia 7 – 16 June 2018.