The 39 Steps is a fast-paced, side-splitting comedy featuring over a hundred characters played by four actors. Based on the 1935 Hitchcock spy thriller movie and novel by John Buchan, the stage production is currently the longest running comedy in the West End and winner of major theatrical prizes from Tony Awards® to the Olivier and Helpmann Awards.

Handsome hero Richard Hannay meets a mysterious woman, who reveals a plot to smuggle military secrets out of the country. That night, she is found murdered in his apartment. With the police and international spies hot on his heels, Hannay races to solve the mystery of the man with the missing finger. His heart-racing adventures involve death-defying escapes from planes, trains and automobiles with the beautiful blonde bombshell Pamela by his side.

Paying homage to the ‘spy’ genre as well as other classic Hitchcock films, the spectacularly funny and cleverly performed stage adaptation of The 39 Steps was hailed as being “theatre at its finest” by The New York Times. Following a smash hit 2013 season HIT Productions brings The 39 Steps back for Australian audiences in 2014. A rip-roaring night out for all the family, don’t miss this theatrical tour-de-force already seen by over 3 million people in more than 60 countries! 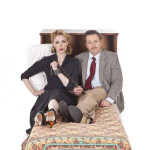 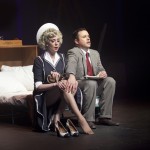 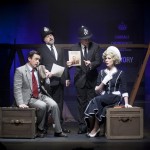